The Essence of New Orleans In a Pendant

I recently had the honor and pleasure of designing an exclusive custom pendant necklace for the leadership of Essence Communications to commemorate the 2017 Essence Festival here in New Orleans. The piece is inspired by an African Adinkra symbol called "Hye Won Hye" and its use in New Orleans' historic architectural wrought iron work, which was crafted by African artisans.

Through this project, I learned some new things about my beloved New Orleans and the cultural retention of the Africans that helped to build and shape her.

"A cultural retention is something that remains from a culture and can be identified as having come from that particular culture. Many are aware of European cultural retentions. Sometimes the elements of African cultures that have been retained are not so obvious. Since the 1800’s, Adinkra symbols from West Africa have been woven into wrought-iron designs found up and down the Mississippi Delta.  These Adinkra symbols communicate complex messages and complicated concepts that relate to individuals and to society as a whole.

In Africa, between savannah and forest, since the 1200’s, smiths have forged metal by hand from clay furnaces fueled with charcoal. One of the main professions of West Africans, it seems, is that of metalworking." (by Karel Sloane-Boekbinder from "The Anvil's Ring")

Hye won hye, translated as that which cannot be burned, is equated with toughness, imperishability, overcoming adversity and endless endurance. In an ironic twist, this symbol is featured prominently in all of the balconies that wrap around the Pontalba buildings in New Orleans. The Pontalba buildings, along with St. Louis Cathedral and the Cabildo, were reconstructed following a devastating fire five blocks wide and nine blocks long that, in 1794, decimated these buildings along with 207 others. Additionally, Hye won hye was a powerful testament to tenacity; in 1788 in New Orleans, 856 buildings had previously been obliterated by fire." (Karel Sloane-Boekbinder ) I can't express how meaningful it was to me to be able to pay to tribute my city and likewise to strong, intelligent, powerful black women in this way - through an ancient symbol that so powerfully represents their resilience through adversity.

Here's a photo of the lovely Michelle Ebanks (with Tina Lawson), president of Essence Communications, wearing the piece. One was also given as a gift to Mary J. Blige at her special Strength Of a Woman brunch (I heard Mary even cried!!). I am humbled and honored! 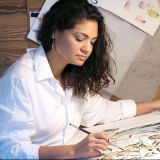 Annie Moran is a New Orleans artist and jewelry designer. She often draws on the people, flora, and fauna of the Gulf Coast for inspiration, yet her work is universally appealing. Shop Annie's line of fine art prints, jewelry, clothing, or home decor. When You Teach, You Learn: The Furr High School Mural Internship

Follow my journey at Houston's Furr High School as a lead a group of incredible young students through the completion of their internship mural! Take a look at one of my favorite projects to date: an entrance hall in Fairhope, AL!